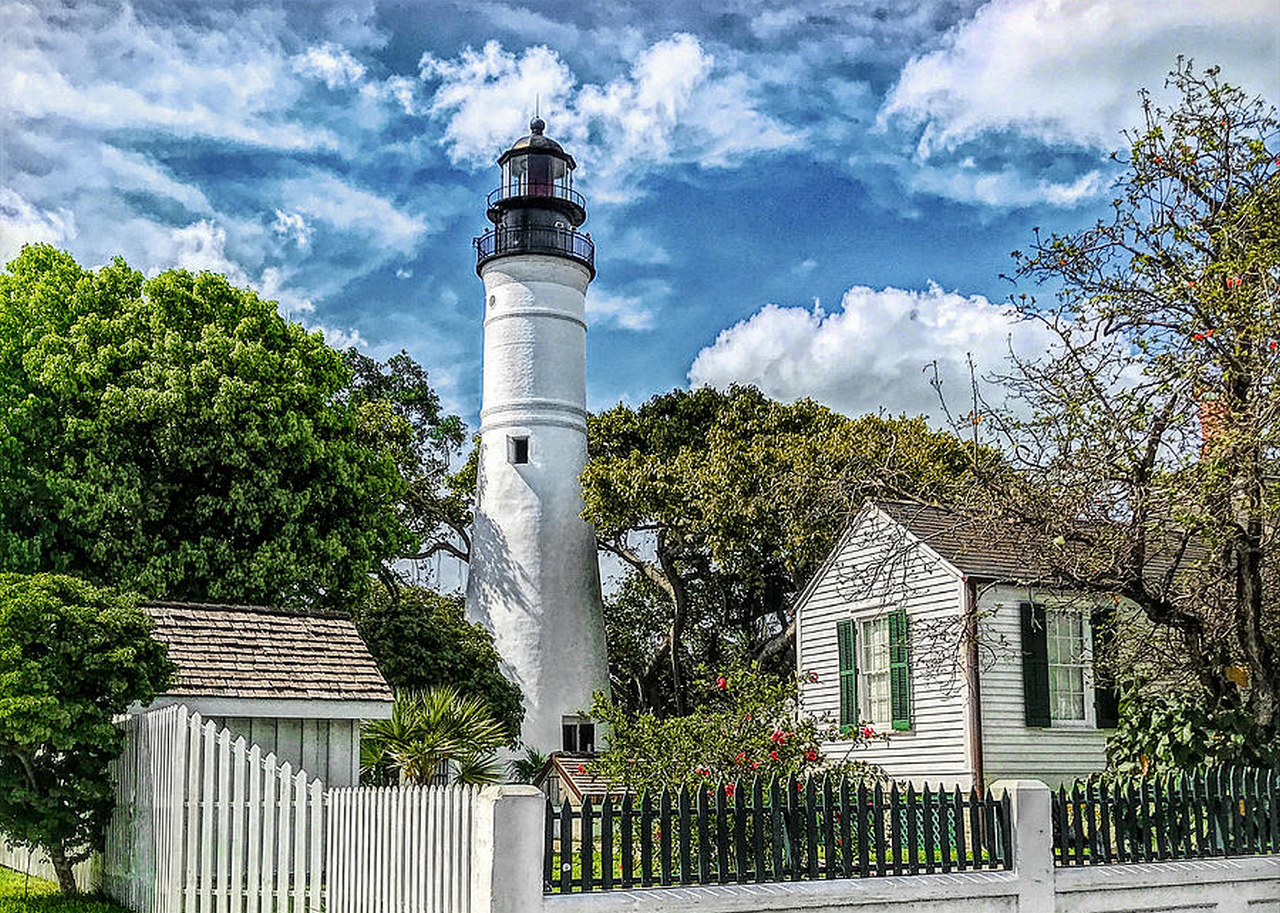 The story of the Key West lighthouse is the story of two lighthouses, the first one was destroyed in a hurricane in 1846 and it was subsequently replaced by the current lighthouse found on Key West today. The current lighthouse was completed in 1848, survived the Civil War, and remained in continuous operation until 1969. It was deactivated by the US Coast Guard because it had been deemed obsolete and no longer necessary. In this article, we will tell you the brief history of this lighthouse, but if you want more information, make sure you check out the traveler’s review of Key West Lighthouse. 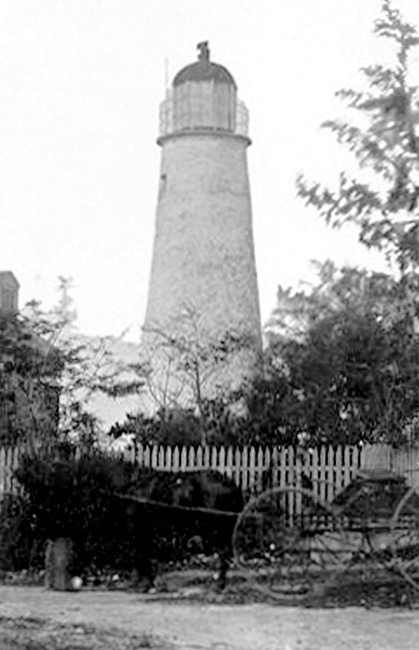 The Key West Lighthouse about 1865. Photo from the Monroe County Library Collection

Key West, first known as Cayo Hueso (Bone Island), had belonged to Span until 1821 when it was officially transferred over to the United States. Not long after the transfer in 1823, the U.S. Navy established a base on the island and quickly recognized that the island urgently needed a lighthouse. The dangerous shallow waters around the Florida Keys had claimed so many ships that the islands had a flourishing salvage industry recovering goods from wrecks in the shallow reefs. Needless to say, the need for a lighthouse became a priority.

The first lighthouse was completed in 1825, stood 65 feet tall and functioned until it’s destruction in 1846, The first lighthouse keeper, Michael Mabrity, died of Yellow Fever in 1832. His wife Barbara became the head keeper after his death and would continue to serve that role for the next 32 years. Unfortunately, 6 of Barbara’s children and 8 other people died when the lighthouse collapsed during the Great Havana Hurricane of 1846. Barbara survived the storm and would continue her role as head keeper in the new lighthouse which was completed in 1848. 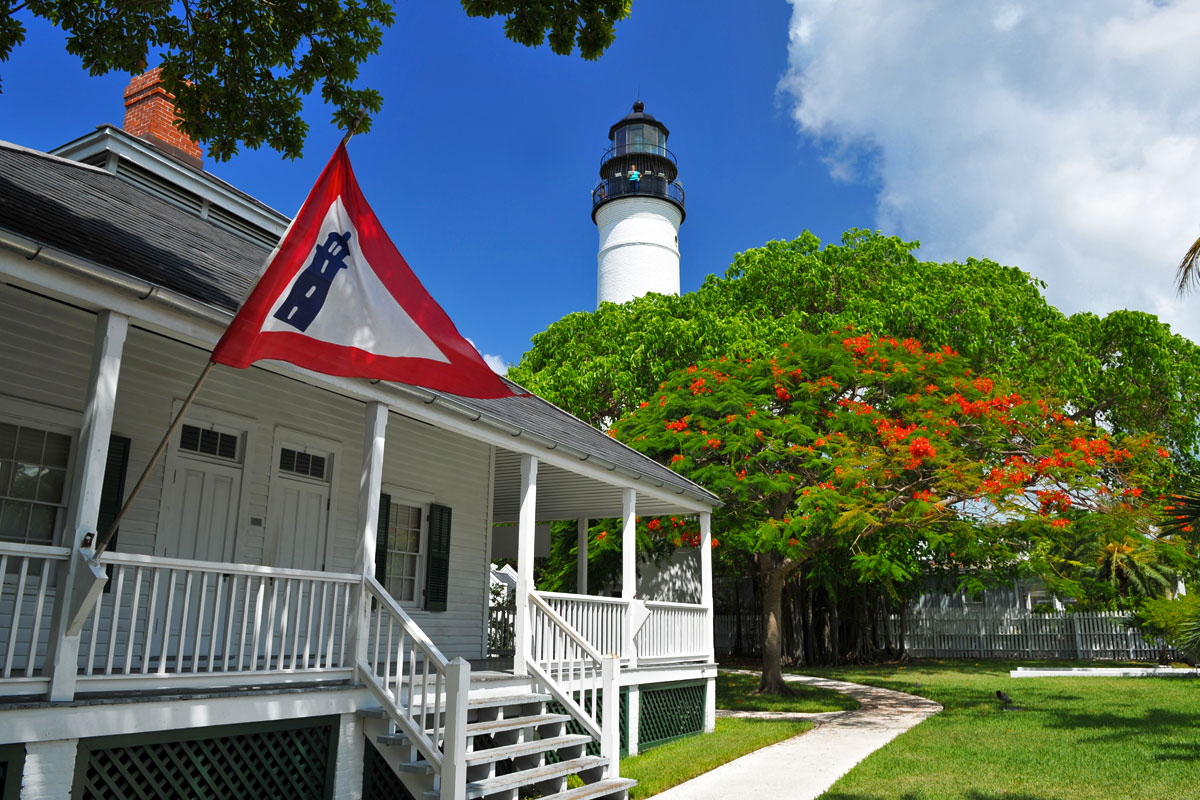 The second lighthouse, and the one that stands until today, was completed in 1848 and was built a little further inland than the original lighthouse. Although the second tower was built 10 feet shorter than the first, its foundations are 15 feet above sea level on one of Key West’s highest points. Barbara, the wife of the first lighthouse keeper was removed from her role at the age of 82 due to her pro confederate views as the Civil War loomed on the Horizon. Key West had been in Union hands before the war and remained Union throughout.

Keeper’s quarters were added in 1897 to provide housing for the keeper’s family and his assistant. The height of the lighthouse was almost doubled to 100 feet above sea level in 1894 and other improvements over the years include electrification of the lighthouse, a balcony, and full automation.

Today the lighthouse is a museum, and it is open to visitors from all over the world. If you’re up for a challenge, you can climb the 88 iron stairs to the top of the lighthouse for stunning views of Key West and the surrounding turquoise waters. The Keeper’s quarters are also open to visitors and have been restored to their original condition and charm, with plenty of original nautical artifacts, furniture, and photos dating back to the time of construction of the first lighthouse.